Few things are both more contemptible and laughable than church leaders obsequiously aping the agendas of the globalist establishment.  How some clergy make “climate change” more their Gospel than the Gospel itself is certainly part of this sell-out behavior.

Take the Archbishop of York Stephen Cottrell.  Please.  The other day he was asked by a Canadian:

The Fifth Mark of Mission of the Anglican Church of Canada is “to strive to safeguard the integrity of creation and sustain and renew the life of the earth.” What’s your advice about how to motivate people in our pews to take positive action about climate change? (and what might that action as a church be?)

A clown question typical of the ACC being far more wedded to leftist ideologies than to the Gospel.  But Cottrell’s answer was even more clownish:

What a good question. Is there a more important question facing the world?

What the….?  A supposedly Anglican Archbishop suggesting that the issue of climate change may be the most “important question facing the world?”  I think the Bible and the Creeds suggest some slightly more important questions.

It gets worse.  (Emphasis mine.)

I think I would start by…two things…on the big picture level I think we need to teach much more about this. This needs to be not a kind of add-on to the Gospel; this is the Gospel…how we inhabit the world in the way of Christ…this is the Gospel. So, I’d want to preach and teach about it much more…

So Cottrell wants the church to go even more all in on pushing climate change agendas.  He even says “this is the Gospel.”

This is outrageous is what it is.  It is also puzzling.  Does he not see what an obsequious sycophant he is playing for everyone to see?  Does he not realize he makes a joke of himself when he says such banal blasphemies?  Does he care? 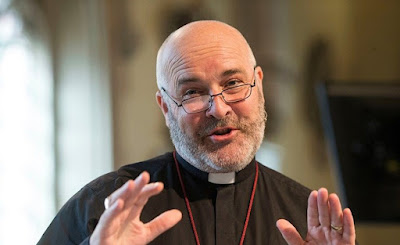 I knew Cottrell was bad news when he was appointed Archbishop of York.  But I did not expect him to be a clown.

This reminds me of another time I saw another Church of England cleric look silly in pushing climate change.  I won’t name names because I respect the woman in question, who has far more intelligence than Cottrell.   But one time, she drank the climate change Kool-aid a bit much and had a bad day.

I was visiting an Oxford chapel on a Sunday morning back in 2007.  She happened to be the preacher.  And her entire sermon was on global warming.  (That’s what it was called back then.)

Well it so happened that very same Sunday was the most miserably wet and cold day that term.  So when, shivering from a long walk in the cold rain, I later entered her college chapel for Evening Prayer, I smiled and admonished her, “You and your global warming sermon!”

I don’t think she appreciated my humor.

To be fair, she normally led her chapel and preached with wisdom.  I say that although her churchmanship was decidedly different than mine.

Nonetheless, when clergy try to turn secular political agendas into Gospel issues worthy of much pulpit time, they not only do a disservice to the Gospel, they are likely to become silly . . . like Cottrell the Climate Change Clown.